We'll be honest, we never thought Bradley Cooper would score a number one hit.

But the Hollywood actor has did just that with Lady Gaga in 2018 with their duet 'Shallow' from the movie A Star Is Born, which he also directed.

But Bradders isn't the first movie actor to score a one-off success in the music world and he - hopefully - won't be the last. Here are a handful of others who made the transition with surprising results:

See more: These are the top 20 richest actors in the world

Why did Michael Jackson wear his iconic single white glove? 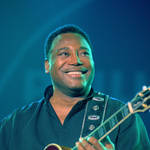