You are going to LOVE this incredible best man speech 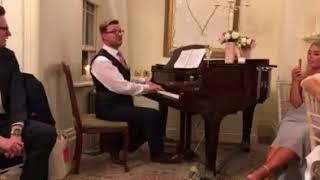 This singing best man gave an incredible speech at his friend’s wedding, which was essentially a long, hilarious and heartfelt musical number.

Wayne Beecham is a musical theatre lecturer in Gloucestershire, so when it came to writing a best man’s speech for his friend Wayne, he used his talents to create what many people are now calling the greatest best man speech ever.

Over the course of about nine minutes, Beecham’s heartfelt and hilarious song tells the story of how Wayne met his now-wife, Lauren.

The rhymes are impeccable, the piano-playing jazzy and precise, and the sentiment utterly lovely.

Beecham said: “I started writing a speech a couple of months ago but I sort of realised the talking thing wasn't for me.”

“Then about three weeks ago I made a list of all the funny things that have happened with my friend Lewis and sat at the piano and it seems to have held up.”

“This is like a one-hit wonder. I came up with the chorus first because I was put on a strict time limit of 10 minutes so I thought I would have to incorporate the toast in the chorus of the song.”