Chic and Nile Rodgers closed Bestival 2014 with a set full of their disco classics.

The guitarist told the audience that Sunday night's headlining performance was "the hardest show of [his] life", following the death of his close friend and guitar tech Terry Brauer.

Chic walked on to stage in their usual white outfits to perform their biggest hits 'I Want Your Love', 'Everybody Dance' and 'Lost In Music'.

"It's been an amazing three and a half years," Rodgers told the crowd, celebrating beating cancer.

"This song I feel was the very start of my recovery," he added, before bursting into Daft Punk's 'Get Lucky'.

Chic rounded off their show with a singalong to 'Le Freak' and a finale of their biggest anthem 'Good Times'.

"This has been one of the hardest shows of my life," said Rodgers, before thanking the fans for their love and support. 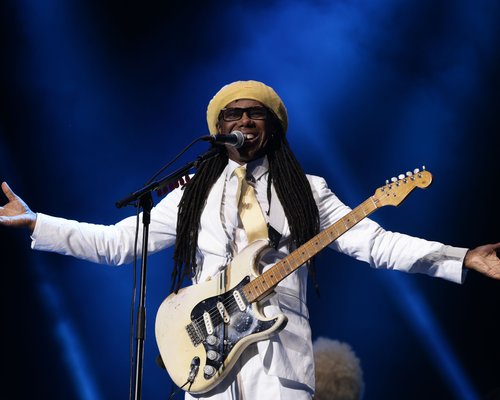