The humble dishwasher is one of our favourite inventions.

No longer do we have to waste hours of our lives scrubbing plates and sponging mugs. Let the dishwasher sort it out, darling.

Well, that is until you realise that the dishwasher's badly designed shelves don't allow you to stack certain crockery, meaning you end up having to scrub them anyway. The worst.

Perhaps, no longer. You may well have figured this out for yourself already, but a lot of people's lives have been changed thanks to a simple tweet by a man from Limerick in Ireland.

Mike McLoughlin was delighted after realising he could adjust the shelves in his dishwasher, and significantly add more items to his load. 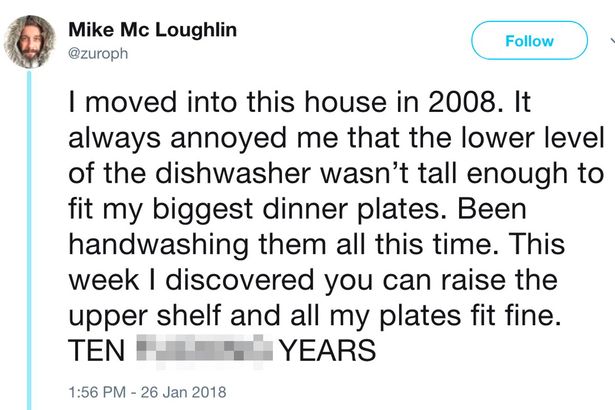 The father of two told Mirror Online that he's lived at his home for ten years, and has spent the last decade hand washing his large plates, unaware of the easy fix.

"In my defence, the dishwasher was here when I moved in, and I only thought to google the manual this week. When I had an underfloor plumbing leak and had to disconnect the dishwasher while pulling out the kitchen."

And here's a few reactions:

Nearly moved house on the strength of this massive problem....you sir are why the internet was invented. Can now spend more quality time with my family #lifechanging pic.twitter.com/uHpDTE3Hdh

Holy crap! It IS adjustable! Mine had fortunately been left in the upper position for big plates & cookie sheets, but now I can lower for various crockery! Thank you
pic.twitter.com/hpRXEO8FNB