The latest edition of Monopoly ENCOURAGES you to cheat

It even comes with a pair of handcuffs!

Anyone who claims they have never cheated in a board game is a fibber! We've all done it at some point, particularly when you're extra competitive and you're currently in last place in a 'fun' game.

Knowing fine well the vast majority of its customers are liable to pulling a fast one from time to time, the creators of Monopoly, Hasbro, have designed a new version of the game which encourages cheating!

"Surely that's pointless?", we hear you asking. Oddly enough, we think the concept could actually be quite fun - here's how it works...

There are 15 cheat cards in the game, including stealing money from the bank, placing a hotel on one of your properties, giving someone less money than you owe, removing someone else's hotel or even collecting rent for someone else's property.

During the game, five cheat cards are placed in the middle of the board as challenges for the players to fulfill throughout the game.

If a player disguises their cheating ways and is successful in their chosen task, they are rewarded. But there is a risk, because as ever in life, if you are caught you will suffer the consequences, such as going straight to jail! 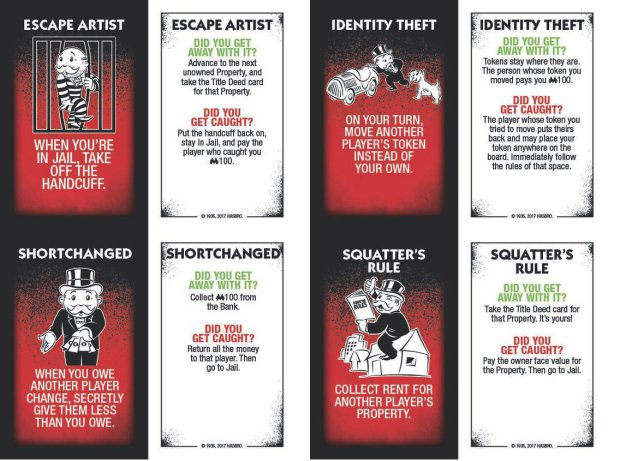 What's more, there is no designated banker throughout the game, making it very easy to slip an extra £100 into your pocket.

Good luck not having any fallouts around the dinner table with this new edition - and remember, don't get caught!

QUIZ: Can you identify the biscuits in these tricky close-up pictures?

Christmas at Kenwood: See the incredible winter light show for the whole family

Gary Barlow promises Take That will return in 2023, but not all five will return