Genesis guitarist Steve Hackett has criticised the recent Genesis: Together and Apart documentary, calling it 'biased'.

Genesis guitarist Steve Hackett has criticised the recent Genesis: Together and Apart documentary, describing it as a "biased account" that "ignores" his solo work.

He wrote on his Facebook page that, although he supports the film's accompanying box-set R-Kive, the programme itself does not represent his views appropriately.

"[The documentary] does not deliver the theme of Together and Apart," he wrote. "Whilst [R-Kive] represents us all equally, the documentary does the opposite.

"In interview I spoke at length as much about my solo career as my time in Genesis, but was not given any editorial involvement." 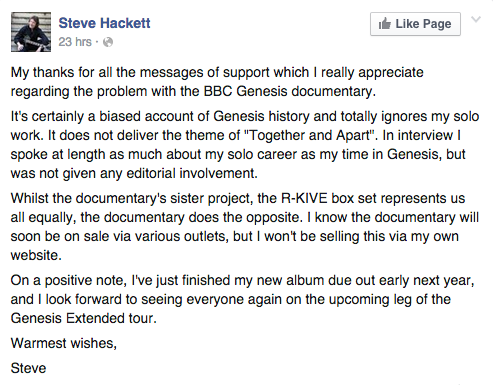 Hackett was a member of Genesis between 1970 and 1977, before leaving to start a solo career. He has since collaborated with a number of artists and released more than 20 albums. He is currently working on his next solo album.

Genesis: Together and Apart was originally described as a Genesis reunion and was set to mix recent interviews with archive footage.