Tom Jones Vents Frustration After Being Cut From 'The Voice'

Tom only found out the news the day before the new line-up was announced.

Singer Tom Jones has taken to Facebook to air his frustration at being axed from BBC show 'The Voice'.

In a post on his page, he describes how he had no idea he was being excluded from the new line-up until yesterday.

An announcement was made today that judges Ricky Wilson and will.i.am would be joined in the new line-up by Paloma Faith and Boy George.

The Welsh crooner, who has been a judge on the show for the last four years described this as "sub-standard behaviour" and "very disappointing". 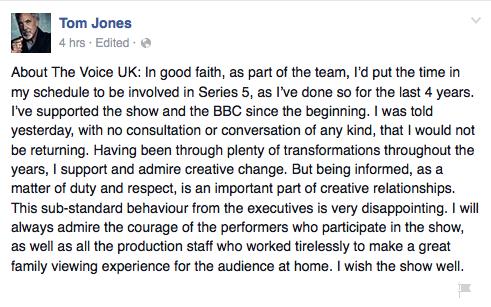 The BBC responded to his post saying, "Tom hasn't been axed or fired from The Voice. He was out of contract once series four ended in April and that contract has not been renewed."

We'll certainly miss him from the line-up this year...