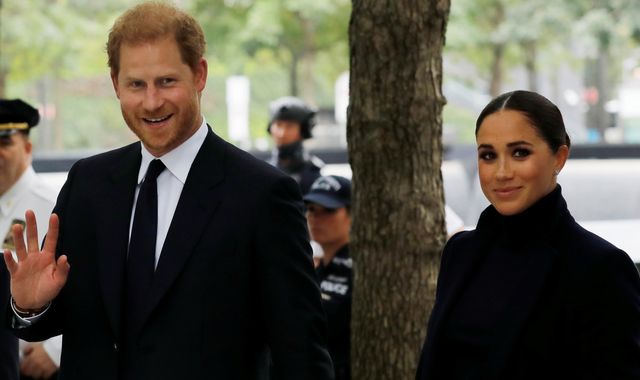 The Duchess of Sussex said it was "wonderful" to be back in New York as she and the Duke of Sussex visited a 9/11 memorial in their first major public trip since quitting as senior royals.

Harry and Meghan went to the observatory at One World Trade Center, which is built on the site of the twin towers.

Asked if she was enjoying her trip to New York, Meghan said: "It's wonderful to be back, thank you."

The visit is also the couple's first public appearance since the birth of their daughter, Lilibet, in June.

Mr de Blasio's family joined the duke and duchess at the top of the skyscraper on Thursday morning.

Harry and Meghan also paid their respects to those who lost their lives on 9/11 during a visit to the memorial on the ground floor, and were dressed sombrely for the occasion.

It comes two weeks after the 20th anniversary of the terrorist atrocity.

The pair have been living in California since the start of the pandemic, after quitting royal duties for personal and financial freedom.

Harry has since been back to the UK, notably for the Duke of Edinburgh's funeral, but not with Meghan.

The Sussexes will still be in New York to take part in an event on Saturday, urging world leaders to adopt a vaccine equity policy to help end the pandemic.

It is part of several shows being held in cities from London to Lagos by Global Citizen, with Ed Sheeran, Sir Elton John, Kylie Minogue, Metallica and Coldplay scheduled to perform.