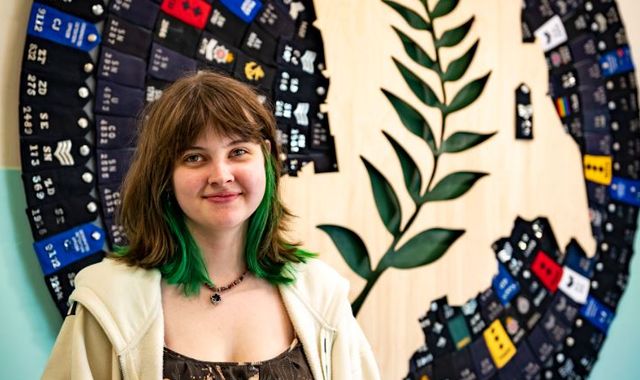 A memorial artwork has been unveiled in honour of police sergeant Matt Ratana, who was shot dead at a custody centre in Croydon, south London.

Sgt Ratana, 54, died of his injuries after being wounded almost two years ago on 25 September, 2020.

He was originally from New Zealand's North Island but had served in the Metropolitan Police for 29 years.

The artwork incorporates hundreds of epaulettes - the shoulder decoration worn by officers displaying their serial numbers - donated by grieving colleagues in emergency service and military teams across the globe.

At the centre of the circular design is a silver fern leaf - the Maori symbol for strength and enduring power - to acknowledge Mr Ratana's heritage.

The artwork was created by three students at Croydon College, where Sgt Ratana's colleagues hosted a project in January.

It now has pride of place on a wall in the custody centre, where a memorial service was held on Friday.

In attendance was Sgt Ratana's partner of five years, Su Busby, who in the wake of his death paid tribute to her "gentle giant" - describing him as her "partner, friend, confidant, support and soul mate".

She said: "I want to thank the students for the inspiring and imaginative collage they designed and created.

"I hope everyone enjoys this amazing piece of art depicting the fern, a symbol representing New Zealand, where Matt came from, and made from the epaulettes donated by police officers and emergency services, commemorating Matt's lifelong commitment to the police service he was so proud to belong to.

"I'm grateful for everyone's continued kindness, support and love in all our loss."

Student Georgina Pender, 18, from Lambeth, said the artwork was a "joint effort" with police officers.

"In making the artwork I learnt that even after bad things happen, there are a lot of good things that can come from it.

"It was interesting to see how much people loved this man I'd never heard of before," she said, adding: "It was nice to give something back."

Met Police Commissioner Sir Mark Rowley also joined the service and was among those who paid their respects by laying flowers on the Matt Ratana memorial bench outside the custody centre.

Also present was commander for Croydon, Chief Superintendent Dave Stringer, who said: "The students have done a wonderful job of capturing what Matt stood for and how people far and wide were affected by his tragic death.

"Every day, colleagues will look at this spectacular artwork and they will remember Matt and be inspired to make a positive difference to others' lives in the way he did with such inexhaustible enthusiasm."