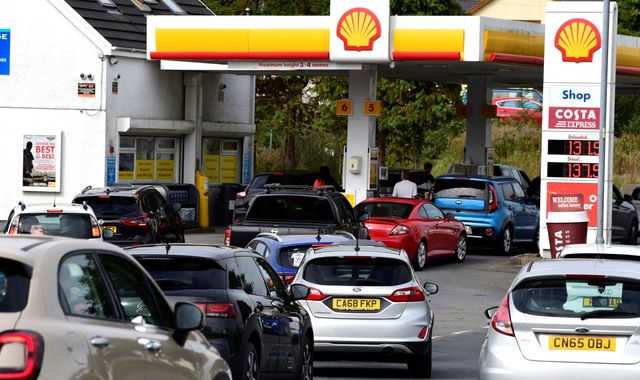 Ministers have held urgent talks on how to address the current shortage of lorry drivers, after the transport secretary told Sky News motorists should "carry on as normal" when it comes to buying petrol after some companies and operators reported fuel supply issues.

Sky's deputy political editor Sam Coates reports that the government is "on the brink of a U-turn" over visas to try and ease the shortfall, which has been estimated at more than 100,000 by one industry body.

Live updates from around the UK on the energy crisis

"Until now the government have wanted to focus on letting people in the country who have high skills. But that excludes HGV drivers," he explained.

"Now we understand that there will be some relaxation of the visa system, possibly along the lines of the temporary workers relaxations that you get for seasonal fruit pickers, that kind of relaxation for the HGV industry."

Political correspondent Tamara Cohen reported earlier that ministers were split on whether or not to offer temporary visas to try and tackle the shortage of HGV drivers.

Meanwhile, Sky News understands that government departments are being asked to come up with emergency contingency plans in case high fuel prices persist.

The developments come as BP said on Friday afternoon that between 50 and 100 stations are affected by the loss of at least one grade of fuel, with around 20 of its 1,200 sites currently closed through loss of delivery supply.

Shell said it is seeing "increased demand" at its petrol stations which in some cases may mean longer queues than normal.

The company added it is adapting its delivery schedules to make sure there are sufficient supplies, while Esso said a few of its sites were affected too.

Tesco said two of the 500 petrol stations it operates were currently affected, describing the impact as minimal and ensuring that supply is replenished whenever this happens.

In an email to customers, Texaco said its fuel supplies are "ample" and it will keep all of its stations adequately stocked, adding there is no need for customers to "fill up more frequently than normal".

Sainsbury's, Asda and Morrisons said they were not affected.

The AA has said that most of the UK's forecourts are working as they should, with president Edmund King saying: "There is no shortage of fuel and thousands of forecourts are operating normally with just a few suffering temporary supply chain problems.

"Fridays and the weekend always tend to be busier on forecourts as drivers either combine filling up with shopping runs, prepare for weekend trips or refuel for the start of the new working week.

"Drivers should not fill up outside their normal routines because, even if the occasional petrol station is temporarily closed, others just down the road will be open."

It is the latest in a series of supply chain issues being grappled with by ministers - after the separate issue of surging gas prices created a crisis in the energy sector and knock-on damage to carbon dioxide production, which has threatened to disrupt food processing.

The shortage of drivers has been blamed on a confluence of issues including non-UK workers affected by Brexit, pandemic delays holding up HGV tests, and drivers being caught up in the "pingdemic" of COVID alerts earlier this year.

Speaking to Kay Burley, Grant Shapps said the shortage of drivers should "smooth out fairly quickly" as more HGV driving tests have been made available.

"The problem is not new," the transport secretary insisted, adding: "There has been a lack of drivers for many months through this pandemic because during the lockdown drivers couldn't be passed through their lorry HGV tests, and that is what has led to this problem."

However, Rod McKenzie from the Road Haulage Association warned: "There's no early end in sight to this.

"We'll probably be having to live with the trucker shortage for at least another year or so, even if the government tackles the issue urgently."

One demand from the industry has been for the government to introduce short-term visas to bring drivers over from the continent to address the shortage.

Asked if ministers would consider this, the transport secretary said he would "look at everything" and "move heaven and earth" to address the issue.

The military could help qualify people to become HGV drivers to reduce the waiting time to pass the test and help boost the number of civilian drivers, a defence source said.

But, at present, there is no request for the military to provide fuel lorry drivers themselves, the source said.

The Ministry of Defence has yet to receive any formal request for assistance from the Department for Transport.

But troops with HGV qualifications have the capability to test would-be civilian drivers to enable them to gain the right qualifications to drive HGV lorries, according to the source.

Mr Shapps insisted throughout his Sky News interview that the COVID-19 pandemic was the "principle cause" of the driver shortage, something he described as a "global problem".

Put to him by Burley that it was "disingenuous" to suggest COVID was the only reason for the lack of drivers, he said: "COVID is the main reason. It is a global problem and Europe is hit particularly bad."

And the transport secretary added: "I've seen people point to Brexit as if it's the culprit here. In fact, they're wrong."

A survey in July of 615 drivers by the RHA found that they thought Brexit was the second most important factor behind the driver shortage, with drivers retiring the number one issue identified.

The latest ONS Labour Force Survey found that 14,000 EU lorry drivers left the UK in the year to June 2020.

Labour Party chair Anneliese Dodds told Sky News that the government's handling of Brexit was one of the reasons behind the shortage of HGV drivers.

"There are shortages of HGV drivers in other countries," she acknowledged.

"I have to say, however, that there have been big failures in planning for this situation and the additional red tape that has been created, which was not inevitable, it was not an inevitable result of Brexit in many cases, but that hasn't been tackled by government."

Meanwhile, Brazil's President Jair Bolsonaro has claimed that Boris Johnson asked him for an "emergency" agreement to supply a food product that is lacking in Britain during their talks in New York earlier this week.

Mr Bolsonaro did not name the product, but said he had passed on the prime minister's request to his agriculture minister.

But the British Embassy in Brazil disputed the president's account, saying that was not its recollection of the facts of the meeting.