Neil Diamond supports England fans' use of 'Sweet Caroline': "I hope you do it again"

Neil Diamond has said he is "thrilled" that England fans have been singing his iconic 'Sweet Caroline' song at Wembley.

Before and after England's win against Germany at Euro 2020 on Tuesday, the crowd could be heard belting out Neil Diamond's classic tune.

Neil told The Telegraph how "thrilled" he was to hear about the song's enduring popularity.

"Well, I hope you can do it again - here's to England", he said in a video message.

The 1969 song has appeared at every England victory celebration at Euro 2020 so far, and became a memorable moment after the team beat Germany 2-0.

After the match, striker Harry Kane and coach Gareth Southgate both spoke about how they enjoyed hearing fans singing the song.

"I was going to play 'Vindaloo', but went with my gut," said Wembley DJ Tony Perry. Even the German fans were belting it out in the end. It’s a song that all fans can enjoy.

"The match director said in my in-ear ‘the world's been closed for 18 months… let 'em have it'.”

During manager Gareth Southgate's interview, he praised it, saying: “To hear [the fans] at the end… I mean, you can’t beat a bit of Sweet Caroline, can you? That’s a belter, really.”

Harry Kane needed to take it all in at full time 🙌🏴󠁧󠁢󠁥󠁮󠁧󠁿#ITVFootball #Euro2020 #ENGGER pic.twitter.com/r3visj1Tcm

How did 'Sweet Caroline' become a sporting anthem?

Despite having nothing to do with Boston, or the Red Sox, or even baseball, the song is played at Red Sox home games in Fenway Park before the Red Sox bat in the the 8th inning.

Amy Tobey first started playing the song in 1997 - and she apparently played it in honour of a Red Sox employee who named her newborn daughter Caroline, but Tobey has said that she simply liked the song.

It proved popular with the fans, and became a popular selection between innings. When Charles Steinberg took over as Red Sox executive vice president of public affairs in 2002, he also championed the song, and placed it as an 8th inning ritual, where it has been played ever since.

The song is an audience participation classic, with the crowd singing "dum-dum-dum" after the words "Sweet Caroline" in the chorus and "so good, so good, so good" after "good times never seemed so good".

After the bombing at the Boston Marathon in 2013, the New York Yankees - rivals of the Red Sox - began playing this song as a show of support. A few days later, Diamond made a surprise appearance at Fenway Park, where he performed the song in its traditional 8th inning timeslot.

Since then, it has been adopted far and wide. The Sydney Swans AFL team play it, as do the rugby side Castleford Tigers.

The England cricket team celebrated their World Cup win in 2019 with several choruses of the tune, and it has been sung often at Lord's.

Arsenal played the tune in 2017 to celebrate their FA Cup semi-final victory at Wembley, and then Aston Villa began singing it at a match against Stoke City in 2019.

The Story of... 'Sweet Caroline' by Neil Diamond

The 13 greatest songs about America: A Fourth of July playlist 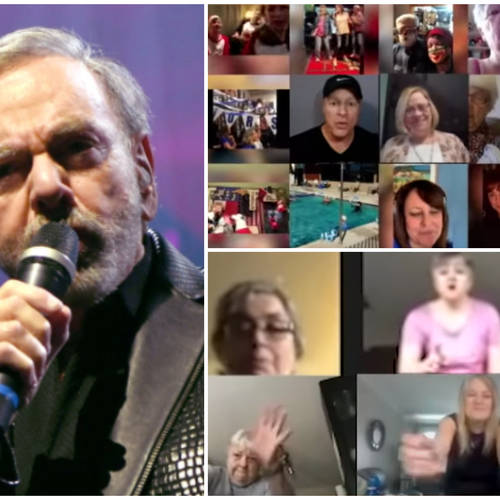